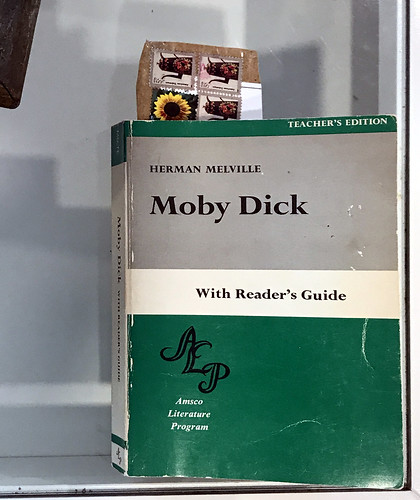 Philadelphia’s Rosenbach Museum is celebrating the bicentennial of Herman Melville’s birthday by offering a variety of programs and classes about the famous writer’s work. Part of the celebration included a marathon reading of Moby-Dick. Similar events have taken place at the New Bedford Whaling Museum in Massachusetts, Mystic Seaport in Connecticut, the Firehouse at Fort Mason in San Francisco, and at Melville’s gravesite at the Woodlawn Conservatory in New York. These celebrations are a testament to the author’s enduring prominence in American literature. His work speaks to today’s generation and our current politics with remarkable prescience. In NRO Victor Davis Hanson recently alluded to Melville’s great novel in a critique of CNN: “But the better question is whether CNN—which has ruined its reputation and profits in an Ahab-esque effort to destroy the Trump white whale—is any longer a media organization at all, or a failing entertainment channel, or a boring Ministry of Truth.”

Herman Melville would be truly surprised by his contemporary relevance, or that he is even remembered at all

After all, Moby-Dick was a critical and financial failure when originally published. Afterwards, Melville eventually withdrew from public life to such a degree that people thought he had died. The New York Times wrote in 1890, “There are more people to-day who believe Herman Melville dead than there are those who know he is living.” Like many notable artists, Melville finished out his life with the impression that he had failed, only to have his work rediscovered and exalted years after his death.

I have taught Moby-Dick to honors students at Caprock Academy, a charter school in Colorado, for 7 years and am always a little surprised by how many teenagers become fans of the novel—despite its length and challenging prose. Melville’s focus on the working class: Nantucketers and foreigners from around the globe performing brutally hard work, resonates with many students, most of whom come from working class families and many of whom have afterschool jobs. The premise that blue-collar workers like those in Moby-Dick are the real engine and backbone of the country rings true—whale hunters fueled the industrial revolution and westward expansion in North America. Their work produced the oil that was indispensable to the nation’s development.

Also, Melville’s beautiful descriptions of the ocean and marine life transports students to another world, and the ferocious and bloody process of hunting, killing, and butchering whales is simultaneously extraordinary and tragic—like the great buffalo hunts in the 1800s.

But even more than these themes, the novel’s iconic characters are the most compelling part of the text for many readers. They are taken in by the darkly charismatic and brilliant figure of Ahab. Lest Ahab be dismissed as a mere lunatic, Melville imbues the one-legged captain with special insight about the world. He is described by Captain Peleg as, “a grand, ungodly, god-like man . . . doesn’t speak much; but when he does speak, then you well may listen. Mark ye, be forewarned; Ahab is above the common; Ahab’s been in colleges, as well as ‘mong the cannibals; been used to deeper wonders than the waves; fixed his fiery lance in mightier, stranger foes than whales.”

Ahab’s perception that the white whale is supernatural and malevolent is made plausible by events in the story: Moby Dick taunts Ahab by repeatedly spouting in the moonlight ahead of the Pequod, as if cunningly intelligent and aware that the men will not lower the small boats at night. Yet during the daytime the whale vanishes. The albino whale is also rumored to have appeared at opposite latitudes at exactly the same time—as if omnipresent around the globe. The “grove of spears” in his flanks suggest he is un-killable and immortal.

In some parts of the text Melville describes Moby Dick as sublimely beautiful: “The rest of his body was so streaked, and spotted, and marbled with the same shrouded hue, that, in the end, he had gained his distinctive appellation of the White Whale; a name, indeed, literally justified by his vivid aspect, when seen gliding at high noon through a dark blue sea, leaving a milky-way wake of creamy foam, all spangled with golden gleamings.” In other places Melville describes the whale as terrifying, “The glittering mouth yawned beneath the boat like an open-doored marble tomb.”

Despite the number of people killed and maimed by Moby Dick, students tend to side with him. They ask: If you were a whale and someone harpooned you, wouldn’t you bite his leg off, or worse?

By degrees, Ahab’s revenge quest destroys him and those around him. On this point there are obvious parallels to our deeply divided contemporary society. Melville shows that hate and obsession are blinding and lead to conduct antithetical to one’s own best interests and better nature. The degree to which individuals disregard the rule of law, due process, honorable fact-based debate conducted in good faith and instead adopt lawless, rage-driven demagoguery and a by-any-means-necessary approach, is reminiscent of Ahab—and especially of Ahab’s end.

First, he abandons his professional and contractual obligation to collect whale oil for the owners of the ship. He orders his men to ignore pods of whales they would normally harvest and to instead focus solely on pursuing the white whale. This is a blatant disregard of the interests of his crew because they are paid based on the quantity of whale oil they bring back to shore. If they come back empty-handed, regardless of how many years they’ve been at sea, they get paid nothing.

Ahab is so consumed with hate and rage that his sense of self begins to unravel. There are moments when he no longer recognizes himself and wonders aloud, “What is it, what nameless, inscrutable, unearthly thing is it; what cozening, hidden lord and master, and cruel, remorseless emperor commands me; that against all natural lovings and longings, I so keep pushing, and crowding, and jamming myself on all the time; recklessly making me ready to do what in my own proper, natural heart, I durst not so much as dare? Is Ahab, Ahab?” Even Starbuck, his first mate, warns Ahab to beware of himself. But Ahab ignores all warnings—from nature, from himself, and from previously trusted advisers.

Like Faust, he puts his soul at hazard. Ahab has the blacksmith forge a special harpoon to kill the albino whale. The blade is edged with Ahab’s own razors, made with special steel smelted from the shoes of fast racehorses, then baptized and tempered with the fresh blood of the pagan harpooners.  Finally, the lethal harpoon is dedicated to Satan. Ahab howls, “Ego non baptizo te in nomine patris, sed in nomine diaboli!” I baptize you not in the name of the father, but of the devil.

By the end, he surrenders the last vestige of his humanity. In his worst moment, he refuses to help the captain of another whaling ship, the Rachel. Captain Gardiner, a man from Nantucket, desperately begs Ahab to help him search for his young boy who has been lost at sea and will surely die before long. The father says, “I will not go till you say aye to me. Do to me as you would have me do to you in the like case. For you too have a boy, Captain Ahab.”  Ahab coldly refuses, “Captain Gardiner, I will not do it. Even now I lose time.” According to Ahab, every minute of the day must be dedicated to killing the white whale. Nothing else matters.

The only one to survive the vortex of Ahab’s destructive conduct is a conspicuously good man: Ishmael. He and Queequeg are by far the most popular characters in the novel according to my students. They approve of Ishmael’s easygoing nature and belief that people should be judged by their behavior, not their appearance. Ishmael’s reaction to Queequeg’s tribal tattoos captures his attitude beautifully,  “And what is it, thought I, after all! It’s only his outside; a man can be honest in any sort of skin.” Then later Ishmael muses, “The man’s a human being just as I am: he has just as much reason to fear me as I have to be afraid of him. Better sleep with a sober cannibal than a drunken Christian.” Many students find Ishmael’s unlikely friendship with Queequeg to be the heart of the novel and point to it as an example of the “golden rule” in practice. Whereas Ahab knowingly mistreats his fellow man (like the captain who loses his boy at sea), Ishmael is his positive counterweight.

Students think it karmically correct and no accident that it is Queequeg’s coffin that pops up from the deep to become Ishmael’s life raft at the end. It seems Queequeg is reciprocating Ishmael’s goodwill and looking out for his friend, even in death.

In Melville, A Biography, Laurie Robertson-Lorant describes the author in his later life and notes that an unsympathetic person might judge that Melville ended as a tragic failure in both his personal and professional life, but then adds: “A sympathetic observer might characterize him as an underappreciated genius, a visionary, an iconoclastic thinker, a sensitive, orphaned American idealist, and a victim of a crude, materialistic society that ate artists and visionaries alive and spat out their bones.”

Melville would be surprised to know that his work is still in print and read today. His presence in American culture is as ubiquitous as the Starbucks coffee shops that are named after Ahab’s first mate, and Melville’s depiction of the devastating and self-destroying consequences of unrestrained, unhinged ambition are as potent and keen as ever.